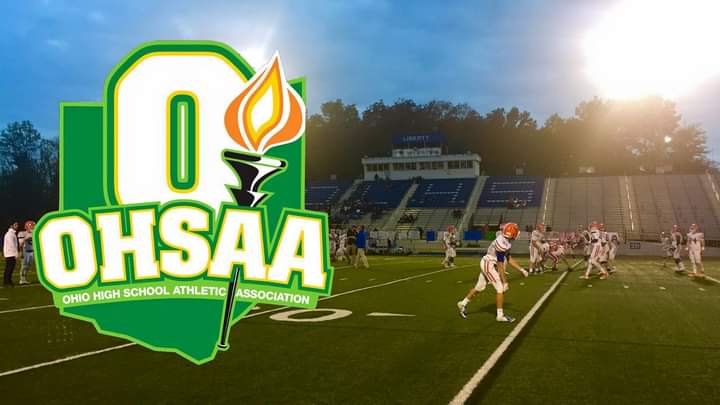 Reynoldsburg and Hilliard Bradley faced off with one another last night in a second-round play of the battle. The atmosphere of the night was just right for a Friday night football game under the lights. Both sides understood the importance of the game. They also did their best abilities due to the COVID -19 pandemic, but to tell you from someone who is an alumnus of the school and been around the city during a playoff game… man, it’s was a great feeling. Going into how significant a factor the crowd would have played in this game and ultimately sway the Raiders’ momentum. After a year off, the Raider’s family lost two former players, and this game would have carried a lot of weight in the community. But in the end, the Hilliard Bradley Jaguars were the victors.

Picking up in the second quarter, you start to see that both teams are getting past the stage of feeling each other out and seeing the game’s real seed. The Raider defense makes a great play at the red zone where they forced a fumble and created a 2nd & goal situation for Bradley, then the quarterback for Bradley threw an incomplete pass on 3rd down and caused them to kick a field goal to make the score (11-10). Hilliard kicked the ball off to Reynoldsburg, and once they got the ball, they took off running. The offense was clicking on the ground, pounding away at the Jaguar’s defense. When the Raiders would try to implement the passing game going with Dijon Jennings, the Bradley secondary defense was everywhere. It was hard for him to get in a rhythm with his receivers. In the end, the raiders keep it again on the ground and turn the result into a Reynoldsburg touchdown ( James Williams) made the score 17-10. After the kick-off, the ball landed at the 35-yard line of Bradley. The Jaguars offense was creating the momentum with a high tempo, a lot of QB out of the shotgun formation and rolling out of the pocket and draw plays up the middle, making the Raiders’ defense tired and looking burnt out.
With 4:23 left before halftime, Hilliard scores with a pass to tie up a 17-17 with ( 2:41) left in the second quarter. Hilliard
Kicked the ball off, the Raiders take over on their 26-yard line. The offense came out with three pass plays in a role all incomplete, and all three attempts looked like the quarterback and receiver connection was not there at all. After that, Reynoldsburg punts the ball away and gives it back to Hilliard Bradley. Bradley takes over on their 28-yard line. They complete a pass to get them to the 41-yard line, then Bradley immediately calls time to stop the clock to avoid any costly mistake on the next play that would jeopardize the game for them. After the time out, the Raiders’ defense gets a sack by Jabari Mitchel and causes the Jaguars to punt on 4th and 19 and ultimately end the half all tied up at 17-17.

As time goes off the clock for halftime, I notice around 1:54 of the halftime break I see the Quarterback of Reynoldsburg ( Dijon Jennings) gather up his reviving core and take them to the field so they all can work on routes and get that connection back before the start of the second half. As he saw and noticed the needed adjustment, I took note of making a great leader and quarterback. They kick off the second half with the Reynoldsburg Raiders getting the ball on the 42-yard line, and the first play they come out with is their bread and butter, a run play for Damiel Broomfield, then come back a passing game to Justin Barko to give the Raiders excellent field position. The crowd is going crazy; the energy is there. The momentum is swinging in Reynoldsburg favor. The Raiders cap of this drive with Williams’s 4-yard touchdown, making the score ( 24-17). The Raiders kick the ball off to Hilliard, and they take over at the 25-yard line. As I watched how Bradley conducts their offensive game plan, I was amazed. The run sets everything up; when I eluded to it earlier in the article how the Jaguars were getting all their chunk play, and scoring drives were all from QB role outs and play action, they were successful in the defense and focused on the run. With both teams coming back from halftime, the Raiders were ready for that type of playstyle. Hilliard’s first time out came as the field end in a three and out with Reynoldsburg getting the ball back with 7:41 left in the 3rd quarter. The Raiders get the ball on the 12-yard line. Reynoldsburg completes the pass for the Raiders 1st down; then, they come with another pass play that Justin Barko caught, but Hilliard stripped the ball! And the fumble was recovered by Hilliard Bradley. Major momentum killer for the Raiders is never false for Reynoldsburg to shoot themselves in the foot and stop them from breaking this game wide open. Hilliard Bradley Jaguars capitalize and score on a screen pass to the running back Deswyuan woods with that opportunity. Hilliard kicks the ball off, Reynoldsburg takes over on the 27-yard line, they get a couple of good productive plays, starting with a 20-yard run by Broomfield. They get down to 4th and one but decide to go for it, and the Raiders convert and keep the drive alive. By retaining the ball, the crowds and the players rejoice! Reynoldsburg keeps moving and gets into another 4th and three situations and decide to go for it with 1:20 left, but they get stopped. So, they have to punt the ball and give it back to Bradley to end the 3rd quarter.

In the fourth quarter, Bradley received the ball but was careless and pushed the ball away from themselves. Reynoldsburg starts their drive at their 22-yard line; the excellent production from their running backs and convert on 4th down with 7:10 left in the game; they come back with a pass play intercepted and kill the driving momentum once again. This interpretation was not the best-looking sight; it was terrible to see the quarterback run around in the backfield, looking for someone to receive the ball. But it doesn’t help when your quarterback throws a jump ball up in the air hoping and wishing his recovery will come down with it under pressure. You won’t get the best outcome. Hilliard Bradley turned that interception into a pick-six! As a result of the Raiders’ costly mistake, Hilliard capitalized on the opportunity to extend the lead, making the score (31-24) with 5:55 left in the game. The Bradley sideline exploded; it was Mayhem. The Raiders get the ball on the 30-yard line, the first play of the drive pass play to Alex Crump-Whitson that would have resulted in a touchdown for Reynoldsburg called back a holding penalty. Another drive and momentum killer, Raiders try to come back with another pass play but fell incomplete and resulted in a Reynoldsburg punt. Hilliard Bradley gets the ball and gets shut down; the Raiders defense does their job and gets the Jaguars off the field. Reynoldsburg receives the ball back on the 46-yard line due to a shanked punt; it’s due or dies time now, a little over 2 minutes left on the game clock. Jennings completes a pass Markez Gillam rush up to the line but gets a false start penalty to be moved back to the six-yard line with 1:08. Raiders call QB run play for Jennings gets them to the goal, then they called a pass play, and it’s caught in the back of the end zone by Markez Gillam off a quick slant making the score 30-31 with 16.5 seconds left in the game the Reynoldsburg raiders play for the win and go for it and try the 2pt conversion. Everyone is on their feet, both sideline in jeopardy of getting sideline warning penalties, but for both teams, which would make the play and advance to the next round. It came down to the Hilliard Bradley Jaguars, making a stand at the goal line and winning the game. The Reynoldsburg Raiders, a halfback dived up the middle with a full box stacked against them and denied poor play calling with the talent and team you have. You come up with that poor execution; you felt the disappointment from the players, the coaches, and the parents in the stands that it was another heartbreaking loss in the playoffs. As Bradley players and coaches run on to the field to celebrate, it was a bittersweet ending for Reynoldsburg football.